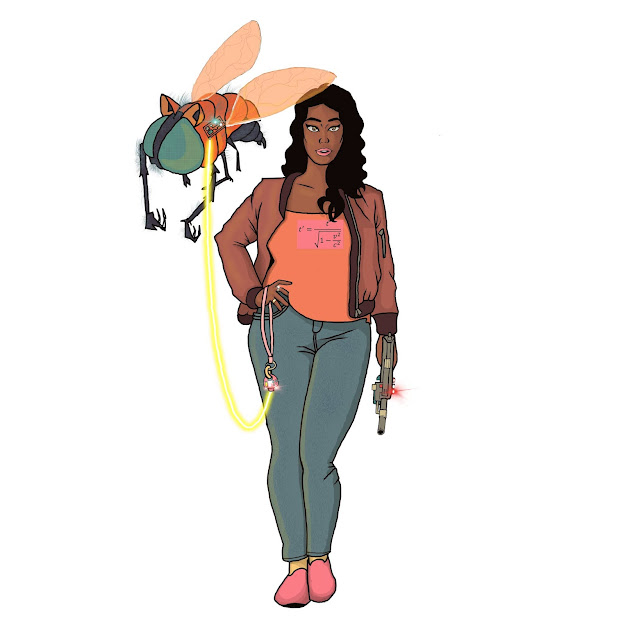 NAME: Jill Vasquez
AGE: 17
BIO:  Scott Turner’s tough-as-nails best friend is also the voice of reason that keeps Skyrat from going off the rails in his quest to battle Green City’s Gangs. Born to a field obstetrician and a mentally ill factory worker, Jill’s mother was hospitalized soon before her father was killed while delivering a baby in the Evil East, effectively leaving her orphaned. After several years in foster care, Jill emancipated from the system, tested into the prestigious Green City High School, and now dreams of being a doctor like her father. But first, she has to pass high school calculus...
EXCERPT:

Blinding neon lights swirled around Jill and Scott, passing beyond them at nauseating speed; a vortex of color, throwing off red, orange, yellow, green, blue, indigo, then violet firework displays with tracers stretching infinitely. Their sinuses clogged. The sound was a hunting knife on a beer bottle, and they tasted copper and rosemary in their mouths. The wormhole opened up into a library. Bookshelves reached up twelve feet to the ceiling. Antique furniture and lamps with green stained glass shades filled the corners. Long tables filled with seated cultists lined the room’s center; some of them reading while others worked equations. They had entered the windowless room at the only part of the wall that wasn’t filled with a bookshelf. Instead, there was a floor to ceiling oval mirror with an ornate gold frame. Their reflection stared back at them.

Jill got woozy. “I need… To sit down,” she told her hand-holding cultist. She helped her to a chair beside a mathematician. Jill coughed into her elbow, noting that the library Brots seemed disinterested in their arrival.

Jill sneezed and asked the mathematician for a glass of water, telling him, “Sorry. Allergies.”

“Same difference,” said the mathematician as Jill accepted a bottle of water. She took a sip, then put an inhaler in her mouth.

Jill looked at his math. “Is that fractal geometry?”

“Not God but the language she speaks,” said Factor. “Follow me.” Scott took Jill’s hand and followed the robed woman out into a long hallway. “I’m the senior monk in Green City, and I run this temple, although technically, we’re not in the temple, we’re under it.”

It suddenly occurred to Jill that Scott was holding her hand. She withdrew it and put her hands in her pockets. Her face went red, and so did his. Breaking the awkwardness of the moment, she asked Factor, “Can I get a book or something in your gift shop to teach me that equation?”

Jill looked at Scott with her brow furrowed. “I’ve got to join your cult to learn the math? That’s not very democratic.”

They turned a corner, leading down another hall toward an elevator. “You’re right, of course,” admitted Factor. She stopped for a moment to face Jill. “But Newton’s equations won’t drive an untrained mind to madness. Einstein’s best work won’t spiritually unravel spacetime. We are no cult. We’re the guardians of sacred knowledge.”

“Wait.” Scott opened his mouth to speak, but Jill put her hand over it. “Scott, you have to ask more questions,” she said. She didn’t trust this Factor character or her cult or her secret math. “For example, what do you get out of this? Why help the Tonys?”