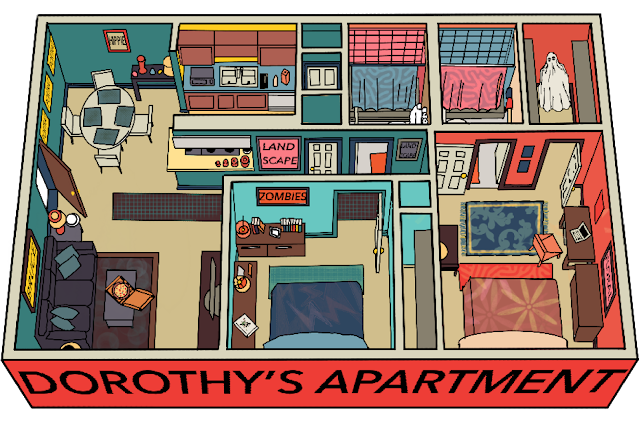 LOCATION: Cincinnati, OH
POPULATION: 1 living occupant + 3(?) ghosts
BIO: Located on the third floor of a three story red brick building in the Northside neighborhood of Cincinnati, Dorothy’s haunted apartment is the stage for the grief-stricken breakdown young Wayne Bird suffers at the beginning of our story. Downstairs, the building’s middle level is vacant while the first is occupied by a self-styled “hive of vampires” who look up to Dorothy as their queen. With her walls adorned in lunatic paintings, Dorothy’s heavenly abode will soon become Wayne’s living Hell...
EXCERPT:

I could hear a woman calling, "What's your major?" Another says "My portfolio is smelly." There is bass guitar and the mashing of buttons. I try to speak but can't. Terry spits. The Flaming Fellow challenges Skyrat to a race, a rematch. My fingers and toes don't belong to me. My tongue is lame. If I could talk, I would scream. If I could scream, my throat would bleed.

I felt a hand on my arm and came awake instantly. Terry said, "You always did sleep funny. You still have to change your sheets every morning?"

"Only when I've been drinking.” I rolled over and went back to sleep.