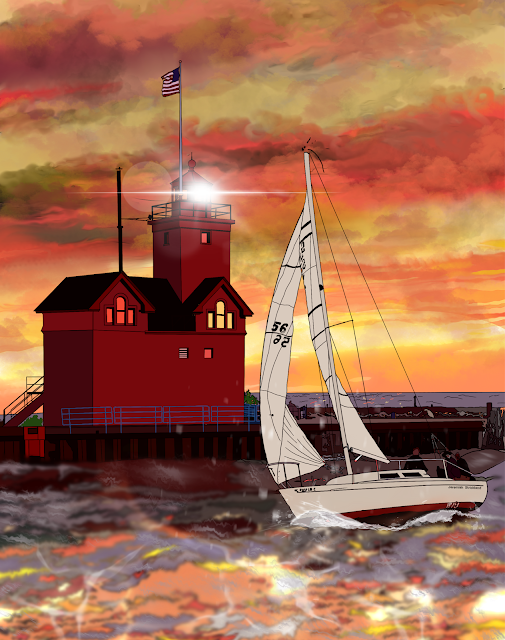 New artwork available at the Shiny Red Nothing Store!

This is Big Red, the famous lighthouse in my hometown of Holland, MI. Put it on your wall, wear it as a dress, or pull it down on your noggin. Two versions are available, one with identifying text and one without. Click the pictures below for more: 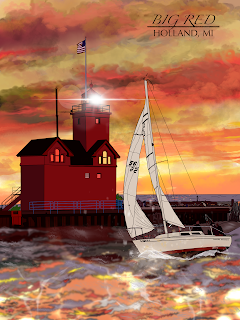 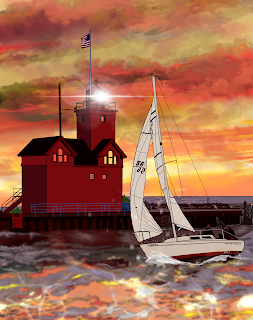 The Holland Harbor Light, known as Big Red, is located in Ottawa County, Michigan at the entrance of a channel connecting Lake Michigan with Lake Macatawa, and which gives access to the city of Holland, Michigan.

The lighthouse is on the south side of the channel. There are two modern lights marking the ends of the breakwaters that extend out into the Lake Michigan beyond the lighthouse.

After decades of local requests that went unanswered, in 1870 the United States Lighthouse Board finally recommended construction of the first light at Holland Harbor. It was thereupon approved by the U.S. Congress.[2]

When seeking a location for himself and his Dutchemigrant followers in 1847, the Reverend A. C. Van Raalte was attracted by the potential of using Black Lake (Lake Macatawa) as a harbor. However, the lake's outlet to Lake Michigan was blocked by sandbars and silt. Van Raalte appealed to Congress for help. The channel was surveyed in 1849, but was not successfully opened due to inadequate appropriations. Frustrated, the Dutch settlers dug the channel themselves. On July 1, 1859, the small steamboat Huron put into port. Here, in 1886, the government established the harbor's first lifesaving station. By 1899 the channel had been relocated and harbor work completed. This spurred business and resort expansion. In 1900 over 1,095 schooners, steamers and barges used the harbor.

The first lighthouse built at this location was a small, square wooden structure erected in 1872, after the U.S. Congress, appropriated $4,000 to the project. This was in large part due to Senator Thomas Ferry's influence.[3] In 1880 the lighthouse service installed a new light atop a metal pole in a protective cage. The oil lantern was lowered by pulleys for service. At the turn of the century, a steel tower was built for the light and in 1907 the present structure was erected. Named the Holland Harbor South Pierhead Lighthouse, it has a gabled roof that reflects the Dutch influence in the area. The lighthouse, popularly referred to as "Big Red," was automated in 1932. When the U. S. Coast Guard recommended that it be abandoned in 1970, citizens circulated petitions to rescue it. The Holland Harbor Lighthouse Historical Commission was then organized to preserve and restore this landmark.

Except for its color, it is a virtual twin of the Kewaunee Pierhead Light on the Wisconsin side of Lake Michigan.[4]

In 2007, the United States Department of the Interior announced that the Holland Harbor Light would be protected, making it the 12th Michigan lighthouse to have such status.