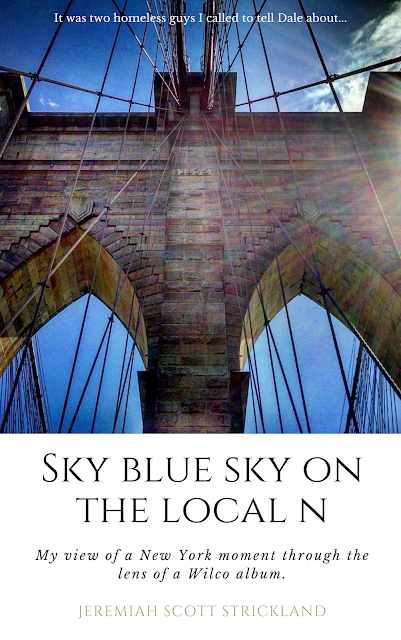 It was two homeless guys I called to tell Dale about.


I was at the 42nd street stop at about three thirty in the morning. At that time, instead of hundreds of confused, idle, or meandering Times Square tourists mixing with the natives about their business, there is no one. Let me rephrase. There is no one that one might want to find themselves with in an empty subway station at three thirty in the morning. From miles away, trains echoed endlessly through the tunnels, toying with me. A train is close, I know it. A drunk staggered down the steps to the platform where I waited, leaned precariously over the tracks to peek into the tunnel for an oncoming train, and then peed there.


The first homeless guy came down the steps like a broken slinky, telling both the drunk and myself, “Hazaag! Muhshuh plubt my – my sub mub.” I pulled myself out of the Land of the Headphones. I was sure this would be worth hearing. “Sbub sbub, sbub,” he told the drunk, who swayed politely.
Then he made his inevitable introduction to myself, announcing, “My hazaag!”


“Mississippi sbub bub,” he assured me, turning out his empty pockets to prove the point. Exhibit A. Exhibit B. You’ll clearly see the defendant has no articles whatsoever in either pocket.


“I see,” I said, giving the case little consideration. “Here you go, my friend.”


“Thank you,” he said, most graciously. Just kidding. Actually, he said, “Smig smag hazaag! Lestinbub, lestinbub,” but I smelt what he was stepping in. Let me rephrase. I understood what he was trying to convey.


He decided to hang around and chat with me. I tried my best to ignore him, but I had called him “my friend,” and he was probably pleased to have a nice conversation with someone who wasn’t commenting on his urinesque odor or asking him if we was Wesley Willis. I could hear trains all around me but miles away. Coming and going. A train is close, I know it. “Muffinbub. Hazaag!” concurred my new buddy.


Sometimes, I hear a story about some homeless guy who’s pushing people onto the tracks. My neighbor has assured me that it’s only the mentally ill homeless folk who perpetrate these acts, but somehow that knowledge does not ease my anxiety as the mentally disturbed homeless man barreled towards myself and the other mentally ill homeless man like he’d kill any fool who got in his way, ordering us to get the FUCK out of his way (which sounded more like gettheFUCKouttamyway). He also made us aware of the reality of his large, heavy, wheeled basket and the fact that it had runned over toes before, and it will runned over toes again.


He passed us, continuing to shout his orders and threats to the emptiness ahead of him. Trains echoed to us from deep within the tunnels. My new associate and I watched him go for a moment before he turned to me, shaking his head disapprovingly, lamenting, “Libry dibry. Muzah hazaag. Hazaag!”


So, I called Dale to tell him that story as I walked to the Prospect stop in Brooklyn at One AM. See, I was asking for it.


The station was empty, and from the other side of the platform (muffled by the concrete walls that separated the tracks), I could hear a Cat Stevens song. I couldn’t tell if it was a performer or a radio. A train is close, I know it. The advertisements that lined the tiled walls were painted over with graffiti and torn. Sexy female news anchors had glasses, strange hair, and blackened teeth. Some newer ads were torn to reveal the older ads underneath, merging into nonsensical media abstractions. The N train pulled up in record time. I hopped onboard and hugged a metal pole because there were no seats available and then reentered the Land of the Headphones, the best place to go when you want to be alone within a crowd of people who want to be alone. Wilco played, and the singer, Jeff Tweedy, sang to me, “Wherever you go, wherever you land.”


At the 36th street stop, the moderately packed car relinquished some of her seats to the destination. I sat to the left of a pair of doors, next to a sleeping Asian gentleman in a black bubble-coat. Across from me was a twenty-something, pudgy Asian girl, reading a hidden tome inside of the fortress of a handbag on her lap. I guessed she was rereading a Harry Potter novel. She pushed her glasses up her nose, eyeing me with disdain for getting it right on my first telepathic communication. Mostly, she was trying to ignore the two young guys next to her as the skinny one in the skewed red Yankees hat tried to keep the fat one in the skewed black Yankees hat from passing out. He grabbed his buddy’s face, and I imagined what he said to him was, “Smig smag, hazaag. Lestinbub lestinbub,” but I wasn’t for sure because Jeff Tweedy was singing, “This is important, but I know you’re not listening.” The fat one didn’t respond to his friend. “If this was still new to me, I wouldn’t understand,” confided Tweedy.


Fatty was, in fact, lost in the realm of Passed Out Drunk Land. Hell, I was nearly there myself. Jeff reminded me, “If this is what love is for – to be out of place – gorgeous and alone, face to face.” Skinny tried a different approach to his task and stole Fatty’s hat and ran with it, provoking the sleeping bear. “No larger problems to be erased,” observed the singer in my ears as Fatty lunged at his friend, shouting, “Asshole!” which I heard over the music as the song continued, “Nothing more important – to know someone’s listening.”


The friends collided into each other against the doors on the opposite side of the car like a hockey check and began drunkenly horsing around. No one paid them any mind but me. I wouldn’t have, but Fatty’s right hand held something shiny and metal. He would let it peek from his pocket enough to show his friend, and then smile at him wickedly, threatening.


They calmed and sat back down by Fort Handbag and it’s studious Lieutenant. She pushed herself deeper into the corner of the blue plastic bench. The boys’ quiet was temporary and came in waves that lasted until one would punch the other in the arm and they’d fight and laugh. Tweedy and his Wilco boys were trading solos for me. Fatty revealed the silver object in his pocket to Skinny, saying, “Mississippi hub bub,” or something else that suggested, “Look what I’ve got here. Don’t fuck with me anymore. I’m just drunk enough to fuck around with this item of certain destruction in my pocket on this moderately crowded subway car. If you steal my skewed black Yankees hat off my dumb shaved head again, I’ll spare no one. Not the sleeping man, the cute Asian girl, or the nerd across from her.”

As the nerd across from the cute Asian girl, I was not pleased when Skinny swiped Fatty’s hat once again and ran back to the doors in front of me, to the left. The drunken one pulled himself to his feet, said, “Hazaag,” or some other equivalent to, “Enough’s enough, douchebag” and reached into his pocket for his deadly… Laser pointer. It was a laser pointer. Pew! Pew! He shot his friend with harmless red dots of light and chased him back to the doors on my right, next to me. Skinny returned the hat to Fatty’s head as the train slowed and screeched to a stop. Fatty laughed at his friend, “Ah, you fucker!” and Skinny slapped his back as they stepped onto the platform. The doors closed again, and Jeff Tweedy sang, “The drunks… are ricocheting,” and I gave an audible giggle amidst the moderately crowded subway car. I love it when it goes down like that.