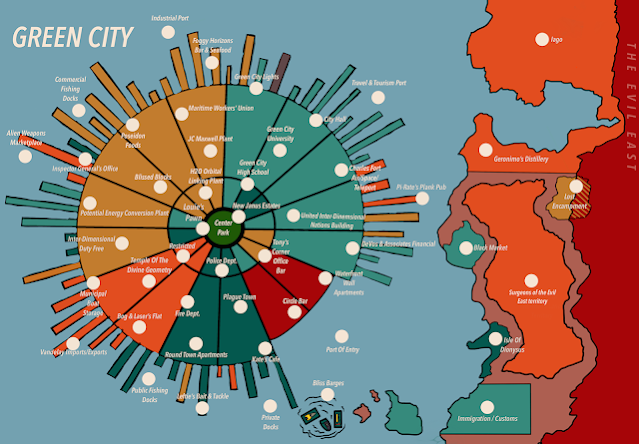 LOCATION: Green City
POPULATION: 25,000,000
BIO: A century ago, the planet was ravished by decades of Bug-Eye infestation, but with the indispensable help of an inter-dimensional benefactor called Minister Prime, a second chance at civilization became possible. Construction began on what was to be the first in a wave of great American walled metropolises. Today, that first city, Green City, is overcrowded, crumbling, and corrupt. Enter the Skyrat, a powerful but inexperienced superhero who’s fight against Tony Poseidon’s gang has put him smack dab in the middle of a war between the city’s four largest competing criminal gangs: The Tonys, The Louies, The Left Hand, and the city’s own Corrupt officials.
DESCRIPTION: “A mile west of the coastline was the circled island of Green City, a six hundred square mile Neo-Atlantis rising from the sea like a spaceship peeking its nose through a portal from another dimension. Callie and Scott’s home, the home to nearly twenty five million other folks, glistened inside its four story walls; a safe haven and prison alike. Scott had never seen it from the air before. To see the enormity of it like this was to be shot between the eyes with its perfect, unnatural, technological marvel. Boats and drones were moving toward and away from it en masse like bugs skating on the surface of the water. Jets, helicopters, and spaceships, the winged creatures of this ecosystem, dipped in and out of the skyline, racing off and crawling in. Near the center of the southeast side of the island were the towering skyscrapers of the commercial district’s downtown. The tallest building was Minister Prime’s, with its needle-like protrusion injecting commerce into the blue dome of Earth’s lower atmosphere.” — Wayne Bird
Shiny Red Nothing · Attack Of The Left Hand / Skyrat's Theme
Labels: bizarro books for christmas Christmas Christmas present ebook Green City magical realism map New book Science Fiction Ship Of Theseus speculative fiction superhero