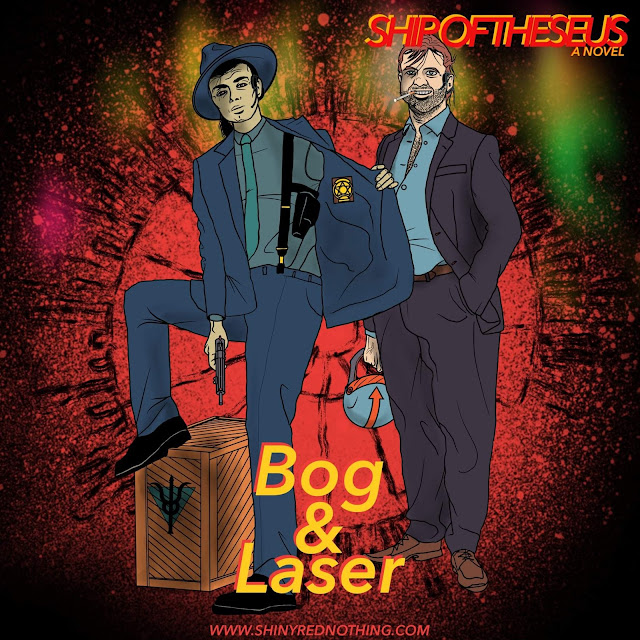 BIO: Roommates at the academy and partners in the prestigious Inter-Dimensional Crimes Unit, Villarreal’s penchant for the nano-mechanical “drug” bliss and Applebaum’s drunken philandering proved a toxic combination that ignited a scandal that nearly cost the pair their careers. Demoted to a position in their home reality, Bog and Laser now work intelligence for the Department Of Piracy, closely monitoring the black market exports shipping out from a disputed corner of the Warehouse District, a hot spot for clashes between the Tonys and the Louies.

When a personal shipment for Louie Louie arrives on a small boat as scheduled, Bog and Laser find their operation impeded upon by The Skyrat, and a career changing opportunity begins to present itself...

Skyrat was on the rooftop of a Lee Choi’s building, sitting on the antimatter containment unit, doing his homework. Lee Choi’s one of those commercial teleporter joints you go to so you can grossly over-pay to send your Grandma in Purple City her birthday present since you forgot to mail it last week. This particular location specialized in teleporting goods fresh off the boat and was significantly larger than any of the city’s other locations. The containment unit hummed under our hero, supplying more power to this one franchise than the entire planet could produce back where and when I came from. Math equations filled the notebook page on his lap. His backpack was open next to him. On the street in front of the Lee Choi’s, just inside the wall at the open dock gate, four Louies gathered next to a beaten-up old green pickup truck, talking loudly, smoking cigarettes. People wandered by them on the street; dock workers, robed and hooded cultists, vagrants, blissed-out space cadets... Other Louies who went by yelled greetings and curses at their comrades.

“No, his sister gave me that one,” a voice from below said. The others laughed.

On the top floor of the neighboring building was Bog. He stood at the window of a darkened room wearing a tailored black suit, black shirt and tie. A pair of binoculars was pressed into his eyes. A radio headset was wrapped over his long black hair, with a mouthpiece curving around his right cheek. Into his radio, he was saying, “I don’t know, man, it looks like he’s doing his homework or something.”

Laser was in the Lee Choi’s stairwell, making his way up the three flights to the roof where Skyrat sat. He was sweating profusely inside of his own wrinkled, ill-fitting black suit. He had to stop and catch his breath. He loosened his tie, unbuttoned the top button of his sweat stained collar, and hunched over. Sweat dripped from his nose and eyebrow. “You should have done this, man,” he told his headset with a cough. “I can’t… I don’t do steps.”

“Pull yourself together, fat man.” Bog lit another cigarette, then looked out at the ocean beyond the city wall. “The boat’s coming. Get up there.”

“I’m kwothing going,” Bog’s partner groaned. “But let me go on record saying that if this kid is as powerful as they say, we’re not going to bring him in against his will.”

“Then we’ll just have to make friends with him,” Bog told him. “Aren’t people your specialty? If we play our cards right tonight, we could bag Skyrat before that nimrod, Patel, can you imagine? If we get him AND Louie Louie in one fell swoop, our careers will be made. Unless you screw it up, like with our gig over at inter-dimensional crime.”

“I always appreciate when you bring that up.”

Skyrat couldn’t see the boat from his vantage point, the city wall blocked his view. Somehow, some daredevil graffiti artist had managed to tag the top of the wall opposite him with his signature, perhaps in Cuneiform or hieroglyphics. It was impressive, maybe saying “Dog Tiger” or “Bag Tripper.”

Laser burst out of the rooftop door, flashing his badge and proclaiming, “Department of Piracy! Drop the pencil, and put your hands where I can see them!”

Skyrat was not intimidated by the frumpy, overweight dude with a badge and a smoker’s cough. He remained seated, his pencil still at the page. He smiled at the guy. The poor fellow was struggling for oxygen. Rat said, “Too many steps, huh?”

“Did you say you’re with the Department of Piracy?”

Laser was too busy coughing to answer. His deodorant was useless.

Below, someone was saying, “...but those aren’t meant to go in your ear.”

Skyrat said, “Come on, dude, you made that up, right?” An answer occurred to him, and he scrawled down Y’s equivalent in his notebook. “There’s no such thing as the Department of Piracy.”

“Sure there is.” Laser pointed to his ID, right below the plastic badge in the imitation leather wallet he was using to display them. “See? I’m Codename: Laser, and you’re threatening our investigation.”

Skyrat had seen his fair share of police badges. He threw his head back with laughter. “Codename: Laser?” he cackled. “Really?”

Laser stood up straight. “That’s right. We use codenames in the DOP.” He glared at the seated kid in the makeshift superhero costume. “Skyrat.”

“Oh, I didn’t choose my stupid name.” He closed his notebook. “I wanted to be called Red Ronin, but after I stomped some Louie for pickpocketing this dude who looked like he was ninety, he told a news lady that I was like a rat who fell from the sky. So, the news started calling me Skyrat, and it stuck.” He started putting his things into his backpack. “You, my friend, made a conscious choice to be called Codename: Laser.”

“The people we’re after are dangerous and have too many cops on their payrolls. Our code names are like… Like wearing a mask.” Laser was getting flustered. “What’s wrong with Laser?”

“Focused beam of light is not the first thing I think of when I look at you.”

“For kwot’s sake!” shouted Bog into Laser’s ear. “That boat is about to pull up!”

Below them, the Louies were driving their truck through the wall’s gate out onto the dock to meet the approaching boat. Laser pocketed his ID wallet. “Skyrat, you have no authority here,” he said in his best cop voice. “Do not, and let me repeat myself, do not intervene.”

The Rat stood up, tossed his bookbag aside, and got in Laser’s face. “Or what?” He had gotten pretty good at acting tough.

Laser put his hands on the kid’s chest and gently pushed him back. “Listen, I shouldn’t be telling you this, but there’s something important coming in on that boat. We have an inside guy, see. That shipment’s important to Louie Louie herself, and it’s imperative to the nature of our investigation that we let it get through to her.”

“Louie Louie herself?” Again, the Skyrat laughed at him. “You’re clueless, man. Look, if you are a cop, we both know the only reason you’d let these guys go without seizing their cargo is because you stand to make a couple bucks off it. Someone has to keep these kwotholes from having their way with our city. Someone has to lay down the law. You cops won't.“ He put his palms up, stopping Laser from correcting him. “You Department of Piracy types won’t do it, so it’s up to me.” In a terrible cockney accent, he added, “And good day to you, sir!” sprinted to the edge of the building, and dove off.

“He’s going for it,” Laser breathed into his radio.