Gangs Of Green City: A Cooperative Superhero Board Game @ Out Of The Box - Zeeland, MI 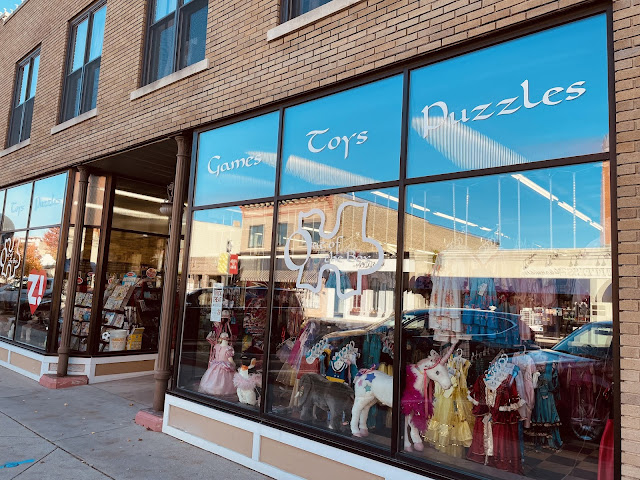 Excited to announce that Gangs Of Green City: A Cooperative Superhero Board Game, my installation from ArtPrize 2021, has found a new home at an awesome local toy store called Out Of The Box. The store specializes in board games and has a vast selection for sale as well as a gaming library complete with a large room with tables where you can try out one of the hundreds of opened games available to play. This is where Gangs Of Green City can be found. It can be played anytime the store is open, but we will be announcing special events in the near future. Stay tuned! 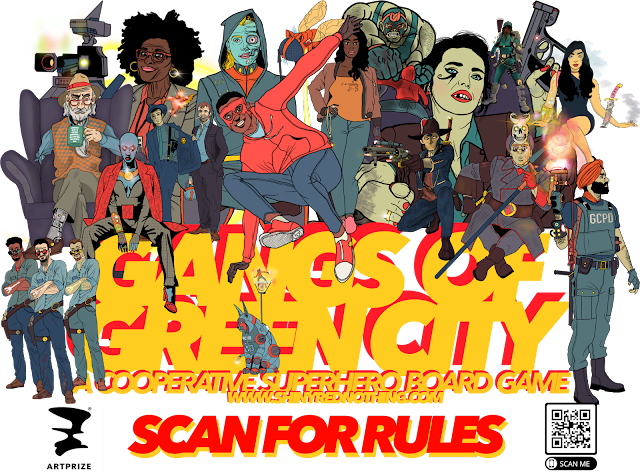 Gangs Of Green City: A Cooperative Board Game Experience

(NOTE: If you’ve ever played Pandemic from Z-Man games, then you know the basics of GOGC. The big difference is that GOGC merges narrative and role playing elements onto the gameplay. Follow instructions on cards to learn what to do.)
The story!

Place the Board in the center of the table within easy reach of all the players. 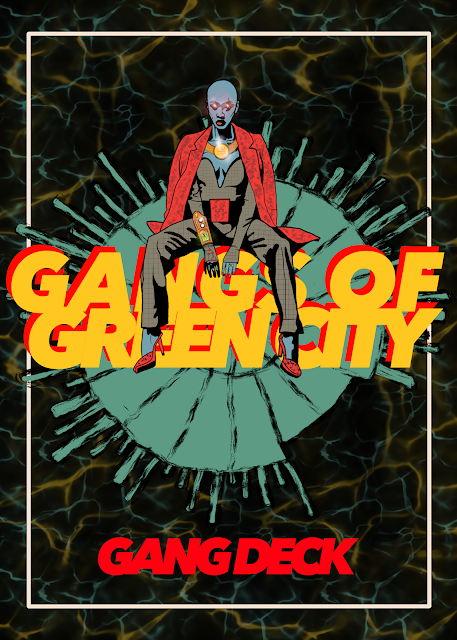 Object of the Game

Gangs Of Green City is a cooperative board game. You are superheroes, public figures, cops, and citizens of Green City, working together to stop the spread of gang activity and corruption in their walled island hometown.

Each of you will assume a unique role within the team, with powers that will improve your team's chances as well as weaknesses that must be managed smartly. The object of the game is to save Green City by ending recruitment into Green City’s 4 largest competing criminal gangs: The Tonys, The Louies, The Left Hand, & the city’s own corrupt officials.

If you and your team aren't able to keep the gangs contained before ending recruitment, Green City will be overrun and the game will end in defeat for everyone.

Play proceeds clockwise around the table with each player taking turns in order until the game ends.

Each turn, the current player must:

(NOTE: The first move out of Center Park does not count against players’ 4 moves per turn.)

- Draw 2 cards from the Hero Deck for your hand

- Take on the role of Gang Leader to increase gang activity by drawing 2 cards from the Gang Deck, placing a Gang Sphere on the corresponding POI’s

(NOTE: The number of cards drawn from the Gang Deck will change as the game goes on)

- After taking the role of the Gang Leader, the player's turn is over and the player on your left begins their turn. 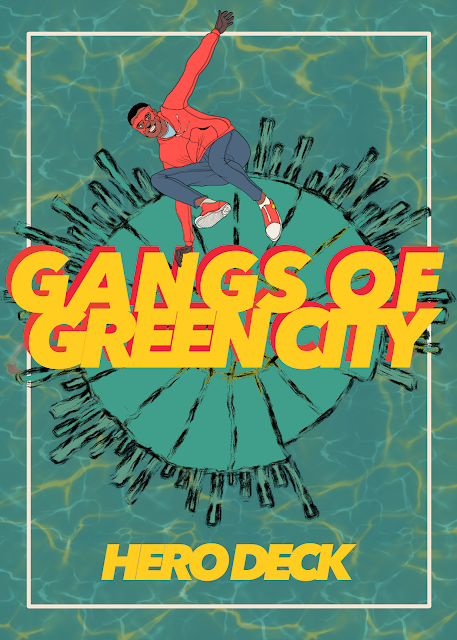 Move your pawn to an adjacent POI. POI’s are adjacent if they are connected by a translucent white line. The white lines that go off the edge of the board "wrap around" to the opposite board edge and continue to the indicated POI’s, either to Iago or the Alien Weapons Marketplace.

Escape Through A Cultist Wormhole

Inaction is not an option. 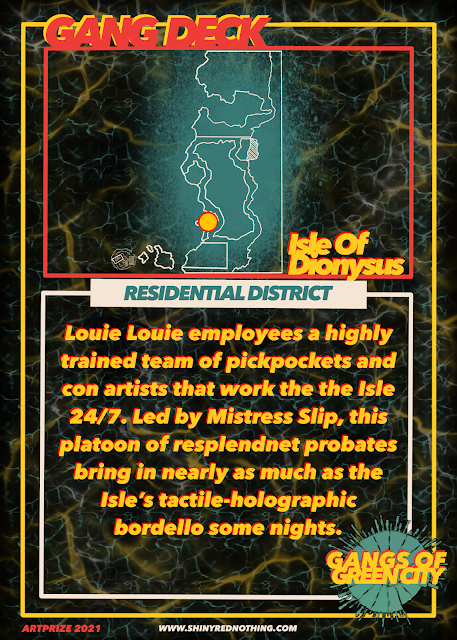 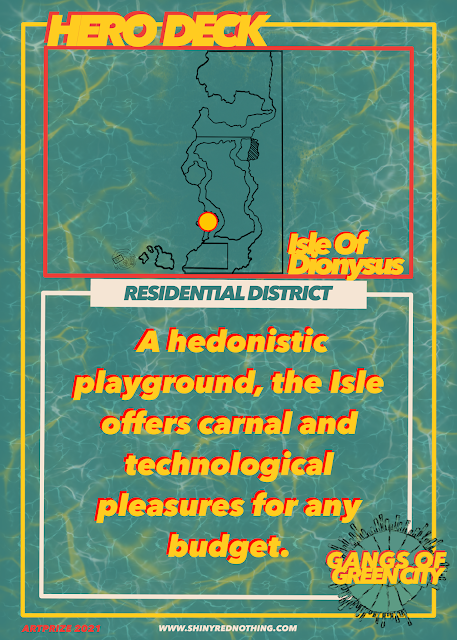 Play the card corresponding to the POI your pawn currently occupies to establish a Safe House at that POI. Discard the card to the Hero Discard Pile.

Once your team has ended recruitment into all four gangs, you win!

If your pawn is at a POI with a Safe House, discard 5 cards of the same District to end the corresponding Gang’s recruitment. Take the marker from the red X at the bottom left of the board and move it onto the space underneath with said Gang’s name. Place the spent cards into the Player Discard Pile.

Over the course of the game, your team will battle the Gangs until you end their recruitment efforts. Remove a Gang Sphere from the POI your Hero Pawn occupies. (Each removed sphere costs one move). Place the removed sphere back into the stock by the side of the board. If players have ended recruitment, instead of one sphere, remove all spheres from the POI.

If a Gang’s recruitment has been ended and your team removes all of that Gang’s spheres from the board, place another marker on the red X above the Gang’s space at the bottom left of the board. From now on, cards of this District will not increase gang activity when drawn on the Gang Leader’s turn. Take all of the spheres of the defeated Gang, and place them back in the box-they will not be used again for the rest of the game.

Sometimes it's hard for one player to get the cards necessary to end recruitment. The Brief Your Teammate move (while difficult to perform) can be useful in these cases.

Transfer a Hero Deck card from one player to another. Every card transferred costs 1 action (unless otherwise noted). Both your pawn and your fellow player's pawn must be at the same POI, and you may only transfer the card of that POI that you are in together. (For example, if you are together at DeVos Financial, only the DeVos Financial Hero Deck card may be transferred from one player to the other).

If either player holds more than 7 cards as the result of a transfer, the excess cards must be immediately discarded to the Hero Deck Discard Pile. 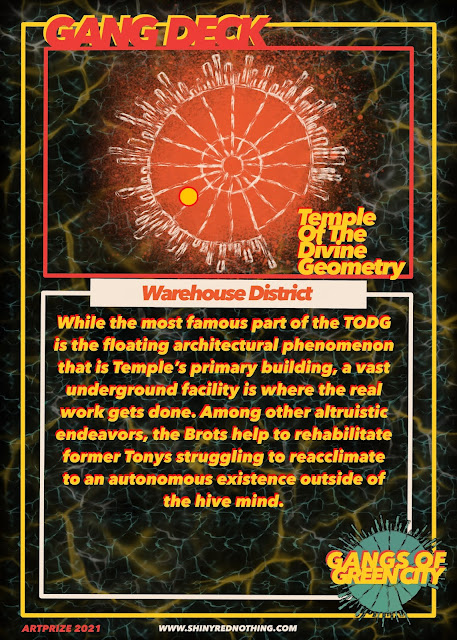 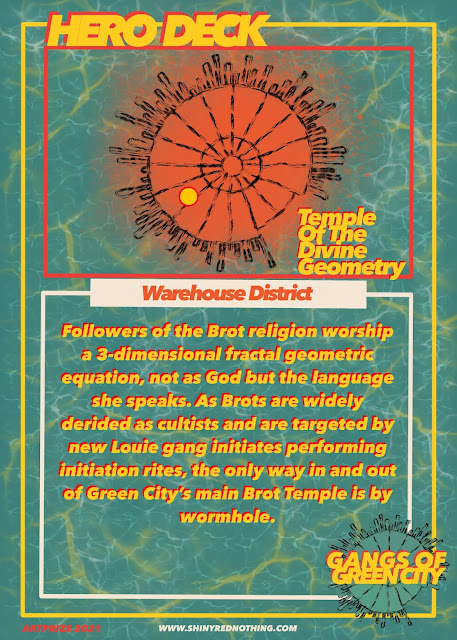 After taking moves, players must draw 2 cards from the Hero Deck to add to their hand. If a card is an ESCALATION! Card, instead of taking the card into hand, refer to the rules for ESCALATION! on the card, paying special attention to the featured character’s weakness. After drawing the required cards, take on the role of the Gang Leader.

If there aren't enough cards in the Hero Deck Draw Pile to draw, the game immediately ends in defeat for all players.

The Hero Deck contains five Respite Cards. These cards may be played at any time (even on a fellow player's turn) and do not require an action to play.

When you play a Respite Card, immediately follow the instructions on the card, then discard the card into the Hero Deck Discard Pile. 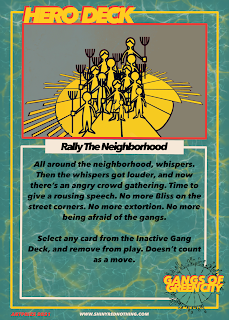 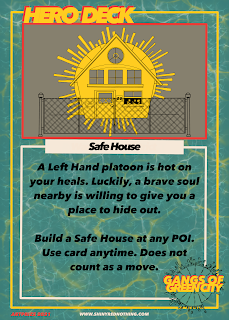 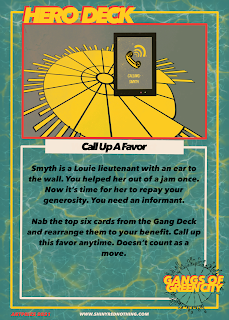 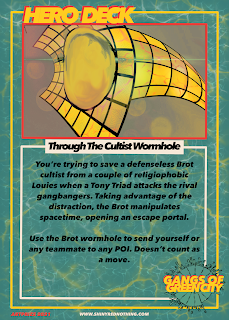 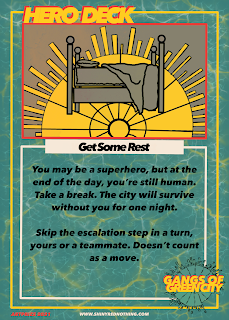 Players have a hand limit of 7 Hero Deck Cards. If the number of cards in hand ever exceeds 7 as a result of drawing cards (or performing the Brief Your Teammate move), the player must immediately discard cards in excess to the Hero Deck Discard Pile.

Players may choose which cards to discard. Players may play Respite Cards (including any they have just drawn) instead of discarding them, to help reduce their hand to 7.

Players may openly display or discuss strategies during the game. Players may freely tell each other what cards they have.

Whenever a player draws an ESCALATION! Card, discard the card into the Hero Deck Discard Pile and do the following:

Increase the ESCALATION METER: Move the marker one space to the right. The numbers on the meter correspond to the number of Gang Deck Cards which must be drawn when a player is taking the role of Gang Leader and increasing gang activity during their turn. Games start with 2 cards and may end with as many as 4.

Escalate: Take the bottom card from the Gang Deck Draw Pile and add 3 spheres to the POI pictured on the card, pay attention to the pictured character’s weakness, then place the card on the Gang Deck Discard Pile. (Note: No POI may contain more than 3 spheres of any color. If the ESCALATION! would cause the POI to exceed that limit, any excess spheres are returned to the stock and a Gang Riot occurs.)

If there are not enough spheres to add to the board during an ESCALATION!, the game immediately ends in defeat for all players.

(Don't shuffle these cards into the Gang Deck Draw Pile). 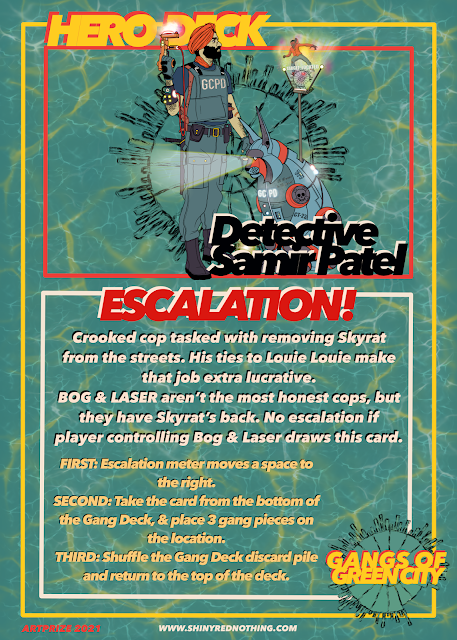 Draw 4 cards from the Infection Deck Draw Pile and add one sphere to the pictured POI, using a sphere of the same color as each card. This increases gang activity in a POI. Resolve the cards in the order you draw them. Remember, no more than 3 Gang Spheres may be at any POI.

If, however, the pictured POI is the color of a defeated Gang, do not add a sphere. If a POI already has 3 spheres of the color being added, instead of adding a sphere to the city, a Gang Riot occurs.

An outbreak occurs if a player is required to add a sphere to a city that already has 3 spheres of that District. When this happens, instead of adding a 4th sphere, instead add a sphere of that color to each adjacent city connected by a translucent white line.

If any of these new spheres from Gang Riots would cause the total number of spheres of an adjacent POI to exceed 3, additional Gang Riots may occur, causing a chain reaction. Note that each POI may only experience a Gang Riot once in each chain reaction.

Gang Riots may eventually lead to an all-out war, ending the game. Each time a POI suffers a Gang Riot, move the War Marker up one space on the War Meter. If the number of Gang Riots ever reaches 8 (and the War Marker reaches the top), the game immediately ends in defeat for all players.

Also, if there are not enough spheres to add to the board when acting as Gang Leader, the game immediately ends in defeat for all players.

After all of the Gang Deck Cards are resolved, place them into the Gang Deck Discard Pile. Your turn is over. The player to the left now begins their turn.

End of the Game

The game ends immediately in defeat for all players if any of the following conditions occur:

Players collectively win the game immediately when recruitment for all 4 Gangs has ended. Players do not need to battle Gangs in every POI occupied by a Gang in order to win the game; victory is instant when any player ends recruitment for the fourth and final Gang.

After your victory, continue the game by defeating all 4 of the Gangs before any condition for your team’s defeat occurs.

Ship Of Theseus: A Novel by Jeremiah Strickland 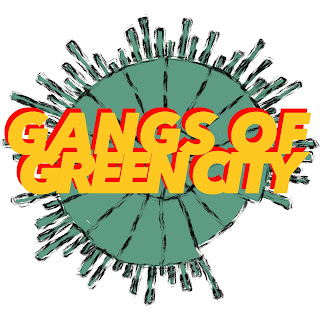 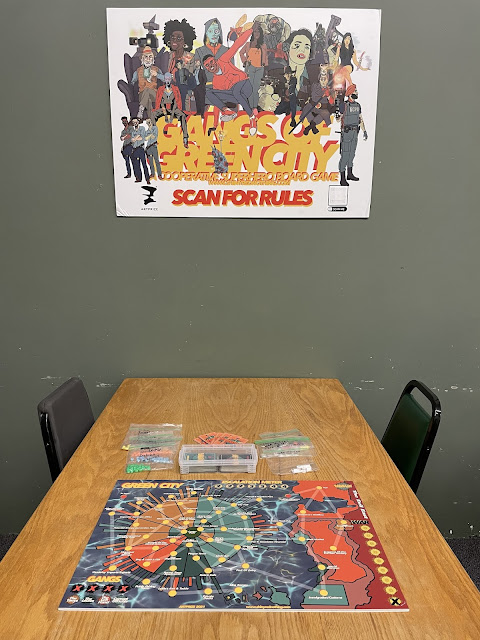 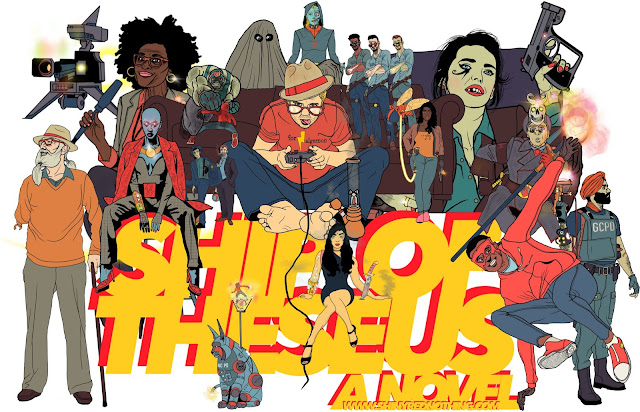